According to the Centers for Disease Control and Prevention (CDC), 70 percent of Americans consume more than the recommended 2,300 milligrams (mg) of sodium per day — and that’s a big problem. The CDC says that consuming too much sodium can lead to high blood pressure (which can increase your risk of heart disease and stroke), osteoporosis, kidney disease, and stomach cancer.

If you’re thinking about cutting back on salt, here are some things that happen when you stop eating salt: 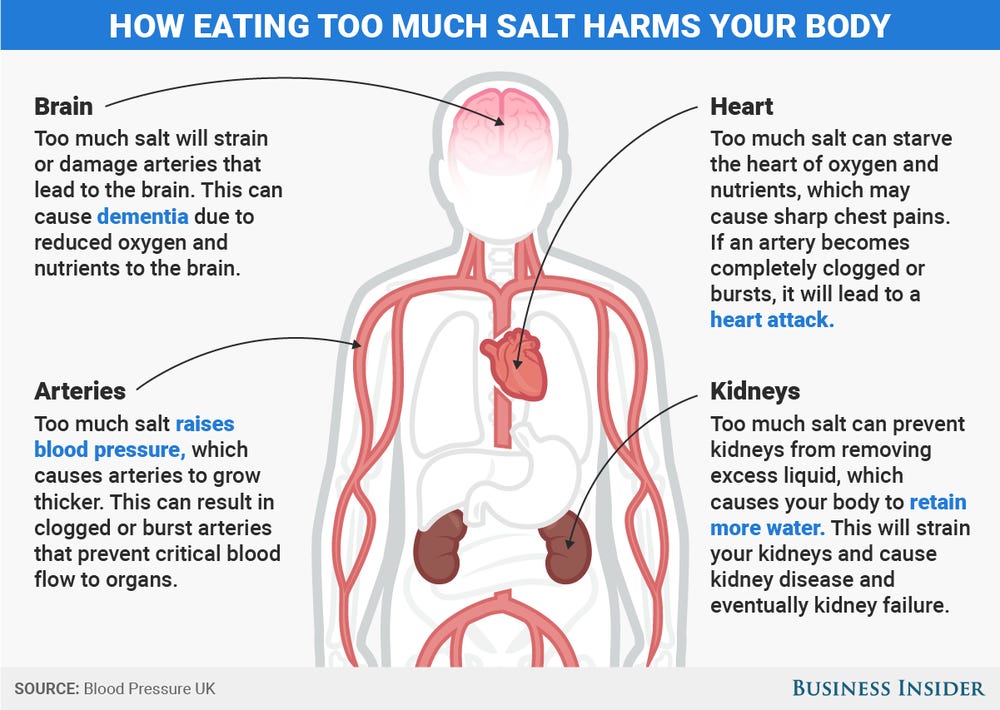 This means more fluid in your blood vessels and heart than there needs to be, which increases blood pressure throughout your body. As soon as you cut back—within just three days—blood pressure levels drop. In one study from 2011, people with high blood pressure who cut back on their sodium intake saw improvements in their heart health after just 30 days. However, the study did not track the effects over time.

If you want to keep yourself healthy and avoid diseases associated with high blood pressure like stroke, kidney disease, and heart failure, it’s essential to limit the amount of sodium in your diet. The American Heart Association recommends eating no more than 2,300 milligrams (mg) of sodium a day—that’s about one teaspoon of salt!

As the body adjusts to new food sources, you will likely feel more energized than you did before. This is because your body has eliminated sodium, which can cause dehydration, fatigue, and a lack of focus. Without these symptoms in place, you may feel your brain is firing on all cylinders.

You’ll feel tired and weak if you don’t replace lost electrolytes with something else like potassium or calcium (which is found in dairy products). If you don’t replace these electrolytes, it can lead to muscle cramps, fatigue and weakness because your body won’t be able to utilize glucose (sugar) for energy production properly. A lack of potassium, in particular, can cause fatigue because this mineral is necessary for muscle contractions — including those involved with heartbeat regulation.

If you’ve been eating foods heavy in salt for years, it might take some time for your taste buds to adjust when you quit eating so much sodium. But once they do, bland foods like rice and pasta will start tasting better than ever before!

You may notice an improvement in your skin’s appearance. Sodium causes water retention and puts stress on your kidneys, which can lead to puffier eyes and puffier skin overall.

Sodium helps regulate blood pressure and fluid balance in your body. When you cut back on sodium, your kidneys will work harder to keep these things balanced, which will produce more urine. You may also need to urinate more often than usual if you’re cutting back on sodium.